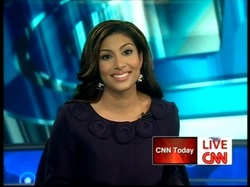 Growing up in Skokie, Illinois, the last thing Kaushal Patel thought she would become was a television journalist. Hard to imagine, but growing up as the daughter of immigrant parents from India, Patel recalls, "I was shy most of my life and not very outspoken. I thought I would end up in the medical or financial field." She was in her senior year at the University of Texas at El Paso, studying marketing and management, when she accidentally experienced a eureka moment.

"I wanted to see how the marketing department worked at a television station. How did they market to viewers?" She went to a local TV station to get her answer. "They didn’t have an internship program for the marketing department, but they had one for the news department." She applied, got the internship, and while shadowing a reporter “fell in love instantly with what a reporter does."  She worked her way up from the internship, to part-time assignment editor, weekend reporter and then full-time reporter. Deciding she wanted to become an anchor and looking for an opportunity, she focused on stations in smaller markets and got a job as an Anchor/Reporter at the NBC affiliate KYMA-TV in Yuma, Arizona, eventually becoming the station’s main anchor.

After almost three years in Yuma — and being single, mobile and focused on advancing her career — she moved on to the CBS affiliate KOLD-TV in Tucson, “just up the road, in a bigger market,” and two years later to KTVT-TV in Dallas, Texas, an even larger and growing market. “I was there for a couple of years, but my dream was always to go to CNN.”

Patel joined CNN International (CNNI is watched in more than 200 countries by more than 200 million viewers) in 2008, initially anchoring from CNN’s headquarters in Atlanta, Georgia, and then from Hong Kong doing a daily 2-hour, sometimes 3-hour, single-anchor international newscast.

Returning to the states in 2010 and wanting to settle in California, she worked at ABC 10 in San Diego for three years.

Kaushal is an Emmy Award winning journalist. She received an Emmy for coverage of Junior Seau’s suicide.  She has also received several Associated Press Awards for Best Newscast and for Investigative Reporting into prescription drugs that were banned in the U.S. as being unsafe, but were being sold in pharmacies across the border in Mexico.